An apprentice at Beatson Clark has won an award from his training centre and is hoping to be taken on full time by the South Yorkshire glass manufacturer.

Alex Bywater (21) has been a mechanical engineering apprentice at Beatson Clark since October 2016.

He won the Maintenance Apprentice of the Year Award at a ceremony staged by AMRC Training Centre in Rotherham earlier this month and received his award from BBC Look North presenter Harry Gration.

The judges said Alex won the award for displaying great passion for his work and for being extremely confident in his role.

Alex will finish his Mechanical Engineering Apprenticeship (level 3) later this year and he has already impressed his employers.

“He is a great forward-thinking young man with lots of ideas and he will be an asset here at Beatson Clark.”
Alex commented: “I’m very proud that I won and hopefully it will help towards securing a job when I qualify.

“The support from Beatson Clark has been good – just trusting in my ideas and knowledge is a lot more than many other companies would do.”

“I’m hoping to secure a job as a mechanical engineer here at Beatson Clark once I’ve finished my apprenticeship.”

Alex was nominated for the award by his NVQ assessor and had to give a 10-minute presentation in front of a panel of judges.

“I believe the factor that won it for me was my cyclone project designed to reduce spillages. This started out as college work but which is now being slowly implemented into the mixing shop.”
Beatson Clark currently employs 10 apprentices, with an additional eight key Managers completing their Level 3 Supervisory Apprenticeship this year, providing them with the Institute of Leadership and Management qualification. 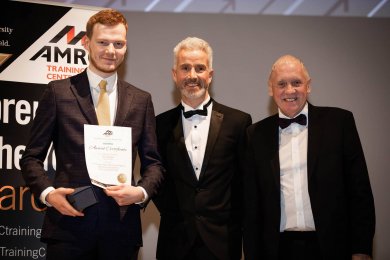