When Louise Avery was looking for a new bottle for LA Brewery’s range of kombucha fermented teas, she knew she wanted a distinctive design that would really make her teas stand out from the increasing competition.

“I have been dealing with Rawlings since 2016 and was confident in their ability as a packaging specialist to find the right bottle for my brand,” said Louise.

“Their consultative approach means they took the time to understand my business and were able to present bottles from multiple sources that would help differentiate our packaging and maximise shelf appeal. One of the bottles they advised on was the Alpha Sirop from Beatson Clark’s range.”

“It’s a higher end bottle which achieves that mix of being slightly medicinal and also rather grown up. Most standard soft drinks bottles have a long neck, but with this bottle the short neck takes you into a different space.

“With the branding we’ve created something that can sit alongside both soft and alcoholic drinks in the pub and still look comfortable. It’s designed to bridge that gap.”

Mark Carroll, Account Manager at Rawlings, said: “One of the biggest complexities is that kombucha ferments in the bottle, so the correct container selection is critical.

“Independent testing was carried out to ensure the container was fit for LA Brewery’s bottling process.”

Louise started making kombucha fermented tea in her kitchen in Hackney six years ago and sold it through cafés in her neighbourhood.

“I loved kombucha and not many people were drinking it at the time,” she explained. “In the first café there was quite an international clientele that was already familiar with the drink so it took off quite quickly.”

Louise says she’s pleased with the bottle and has noticed her competitors following her example.

“The packaging works very well – more and more brands are seeing our bottles and they’re following suit with something similar,” she said.

Charlotte Taylor, Marketing Manager at Beatson Clark, commented: “Our apothecary range of pharmaceutical bottles look great on the shelf and they can give a drinks brand a really distinctive, vintage look.

“We’re pleased to say that the range is becoming more and more popular with our customers, particularly for artisan spirits such as flavoured gins.

“Customers can even have these bottles embossed with their own name, logo or design, and the resulting bottle will still cost much less than a bespoke container that we’ve designed for them.”

Beatson Clark’s apothecary range includes Winchesters, Tablet bottles and jars, Alpha Sirops and Sloping Shoulder Flats with a variety of neck finishes. Most can be produced in either white flint or amber glass and several are available from stock. 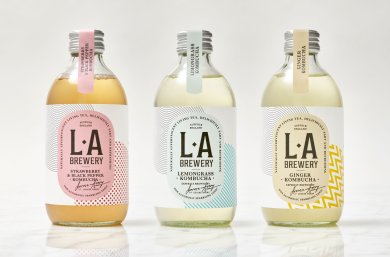